This week, Fox Sports’ Chris Broussard said the top two issues that LeBron James was considering for his next NBA team as he goes into free agency this summer are having a place where his family can thrive and winning championships.

To me, that makes LeBron’s choice for his next team obvious–join Kawhi Leonard, LaMarcus Aldridge and Coach Gregg Popovich in one of the best cities to raise a family—San Antonio.

Anyone who watched LaMarcus Aldridge and company during the first round of the 2018 playoffs (in which our seventh-seeded Spurs fell to the second seed Warriors in five games) knows that if Kawhi Leonard had played, the Spurs likely would have had just enough to defeat Golden State, and maybe pick up title #6 in the end. 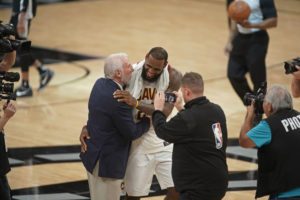 Kawhi Leonard knows it too—media narratives surrounding potential Kawhi-centered trade talks have simmered as both the Spurs and Kawhi appear to be set to agree on a contract extension before next season begins.

Members of the Spurs voted LaMarcus Aldridge to receive the team’s “Backbone Award,” from the NBA Players Association, an accolade awarded to the teammate that best “represents the heart and soul of their team.” LaMarcus Aldridge’s Herculean effort was the product of the tenacity and willpower he displayed in the face of adversity, adversity that arrived in the form of robbed title hopes, stolen by Kawhi Leonard’s left quadricep.

To once again combine the best two-way player in the NBA (Kawhi of course) with San Antonio’s trademark diamond-in-the-rough cast of role players will make the Spurs, once again, a powerhouse in the already-stacked Western Conference.

In the midst of the first round of the playoffs, within the city of San Antonio and beyond, the attention was shifted away from the game. Erin Popovich, the long-time best friend and wife of Spurs head coach Gregg, passed away, inspiring millions of messages of condolence and support to her loved ones. LeBron James offered a message of his own following a game against the Indiana Pacers on the day of her passing. The raw emotion the nation witnessed LeBron display in support of his friend, Gregg Popovich, truly means something.

There isn’t a team competing for LeBron’s talents in the off season that can match coach Gregg Popovich’s connection to his players.

Pop has earned his players’ respect for his mix of on-and-off-court convictions, overall basketball genius, and his commitment to strong interpersonal relationships. His work for causes such as the Innocence Project, which works on criminal justice reform and exonerating the falsely accused, certainly stands out to an individual such as LeBron James, an activist in his own right as the foremost face and voice of the NBA.

In joining the Spurs, LeBron will find the championship pedigree necessary to win a title in today’s NBA. He will also learn that San Antonio is amongst the best major cities to raise a family.  His three children will be able to get a great education.

He will see a city that respects its celebrities’ boundaries and fanfare more fervent than anywhere else, aided by 2 million passionate fans that call San Antonio home.

San Antonio is a fast-growing one-sport city. LeBron James has never played in a city in which an entire population is solely dedicated to being the Spurs’ off-court sixth man.

The hill country real estate is beautiful, and the inevitable endorsement TV advertisements will still be filmed and produced in the River City—on top of the $53 million the Spurs can offer.

Maybe his wife, Savannah, will travel to Dallas or Houston for certain luxuries, but Neiman’s, Nordstrom, Saks, and more still populate our city’s shopping centers.

At the end of this offseason, LeBron will find his way home to San Antonio. Every superstar that passes this way will testify that there is something different in the water here.

If family and winning are what LeBron James cares about, San Antonio will do him well.