What Will SA Name After Obama?

KROV wants to know, what will San Antonio name after the former president? 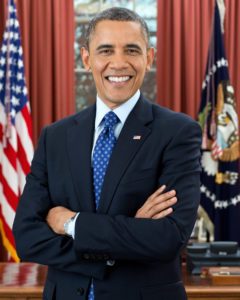 President Barack Obama is photographed during a presidential portrait sitting for an official photo in the Oval Office, Dec. 6, 2012. (Official White House Photo by Pete Souza)

Historian David Brinkley recently predicted that President Obama will be one of the top “four or five most celebrated figures in U.S. history.”

Four years ago, a change.org petition to former Mayor Ivy Taylor to sought to change W.W. White Road and W.W. White Elementary after former Spur David Robinson,  The petition garnered only 84 supporters in spite of the fact that W.W. White was a confederate colonel who fought for slavery out of Georgia’s 7th Infantry Division.

Today, with the rise of white supremacy, many are looking for unifying figures that honor the best of American freedom, democracy, and justice to honor.

Northside residents received highway funds  from the Obama stimulus package to complete the southern interchange of 1604 and 281 as part of a plan to fund shovel-ready projects after the economy collapsed at the end of 2008.  It is possible that the Alamo Regional Mobility Authority and  the Texas Department of Transportation look to rename the highway section President Obama helped get funded to alleviate Northside traffic.

From roads to schools, hospitals, and beyond the things named after President Obama are in the hands of citizens and their elected officials.